Choose bicycle frame size according to your height

They say that the free space between frame and a cyclist who is standing on the ground should be between 7 and 10 cm. 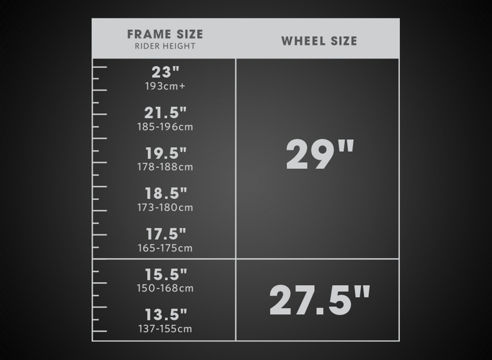 How to switch Gears

Basic idea - the chain has to be set straight to avoid "diagonal" position which would create additional friction and, therefore, would reduce the life time of the chain and chain wheels. If you have three gear wheels in the 'system' (front gear wheels, left shifter) and seven in the 'cassette' (back gear wheels, right shifter), then theoretically your bicycle has 3 x 7 = 21 speeds. However, it is not suggested to use them all. Shown in the image, when in 3rd gear, the chain is on the larges wheel in the system 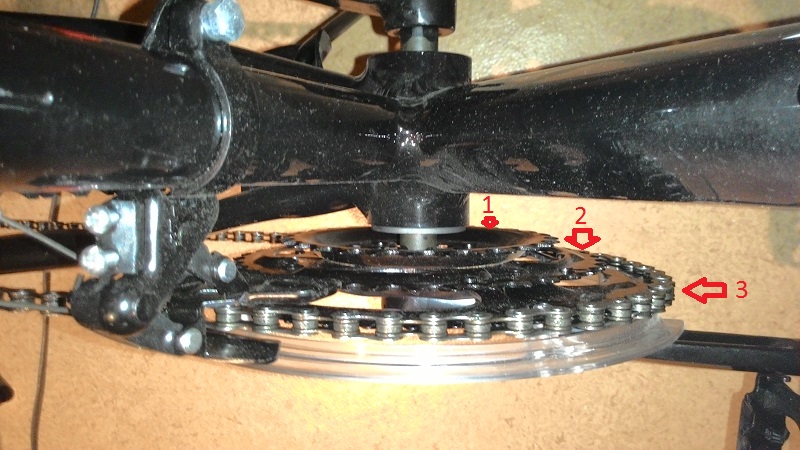 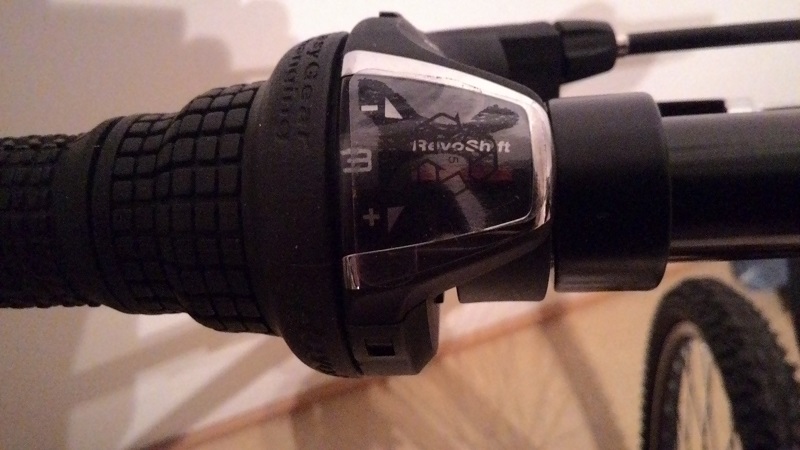 You can use the three smallest cassette gear wheels with it so possible variants are: 3-7, 3-6, 3-5. 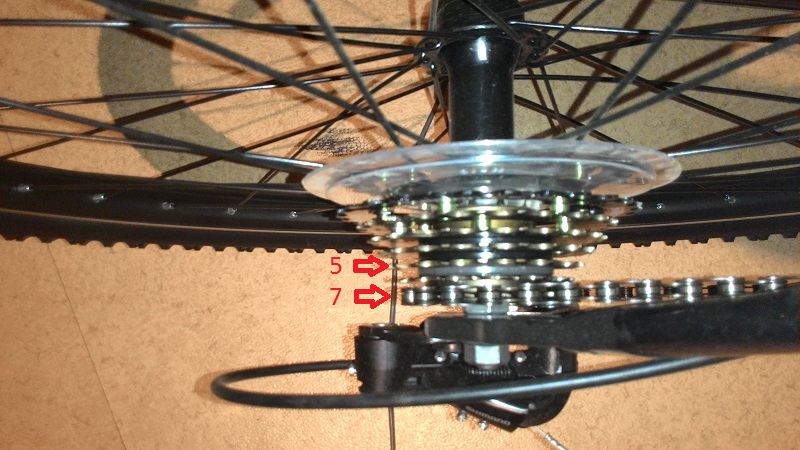 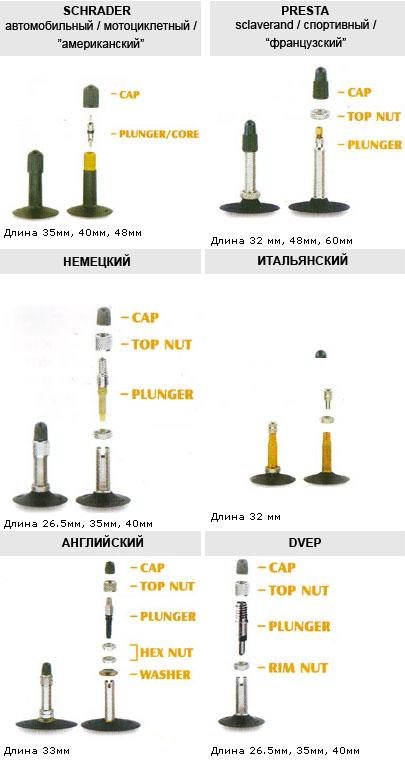 How to pump Presta Valve

How to lace the wheel

On some websites that sell bicycles, equipment, for example shifters, is characterized as «basic level» or «city journey» or something else. I have tried to match these names with the existing Shimano equipment. Starting with the cheapest and ending with the most expensive. For MTBs:

How to setup gear shifters

Check the location of the switches. The front should be parallel to the system. Distance between the big gear in front and the strap (it can be pulled by hand) should be 2-3 mm. We tighten the lambs (kegs), adjusting the tension of the cables, to the stop and then unscrew about one full turn.

At the back we put on the smallest gear, in front in the greatest. Let's release the screw holding the cable of the rear interloper. On the switch with a screw with the designation L we set the switch so that the small cassette gear and two gears switch were in the same plane. We pull the cable with the hand as much as possible and pull it with a screw. Check how the rear switch works. If it does not go well for big stars - we pull the cable by turning the lamb on the right sticker against the hour hand. We toss the chain to the largest gear behind.
Turn the H screw on the switch so that the gears lie in the same plane.

How to remove cassette

You will need some wrenches, an adjustable spanner and a special cassette removal tool.

After you have tightened the wheel you need to check if it is too tight. Rotate the wheel and wait after it stops. If it makes a small but noticeable move to the opposite direction then it is okay. If it does not make this move, slightly loosen the nuts.

A solution is simple - you do not have to pull your hand up, but push down width all your weight, after putting wheel in a convenient position. wikibooks.org

How to Protect Your Bicycle From Beeng Stolen

When I lived in Lappeenranta and after I moved to Tampere I always read some Facebook messages about stolen bicycles. It is impossible to guaranty that your bicycle will not be stolen from you when you need to leave it somewhere near the university or near a shop. This being sad I am quite certain that many of the stolen bicycles were not protected properly and therefore became an easy target for thieves. Shown below are some examples from the neighbourhood. If it is your bicycle that I accidentally took photograph of, and you do not want it to be here just send me a message and I will remove the image. The first and the most important rule that you have to keep in mind:

The more expensive your bicycle is, the stronger protection it requires

This is how I use them together:

You have to keep a heavy chain lock somewhere in your bag, due to the weight and size. This might result in you forgetting about it's whereabouts and this is why you should always keep a cable lock on the frame (try not to forget keys). I also recommend to put the chain or cable inside the wheel, especially if you have a fast removal system.

If you lock your bicycle trough only one wheel this is what might occur.

Here is a good example of using this type of lock:

The owner of this nice (I guess one of the best non e-bikes in the neighbourhood) Bianchi bicycle is aware of thieves and doing everything right. Bicycles have to be protected from easy thefts. For example it is quite easy for someone who has a car to lift up the bicycle with the lock still on and leave. It is also possible that someone can come along with metal clippers and cut through the cable lock. But if this bicycle is also secured with a chain lock then it will be much harder to steal, as it requires more effort and equipment to remove the lock. The thief will see that he needs to use many of his skills and various equipment (clippers and car) to steal your bicycle so, he will probably choose someone else's bicycle. If you leave your new Cannondale outside overnight, your bicycle will most likely not be there in the morning because the temptation of such and exquisite brand is unavoidable for thieves.

wikipedia about the locks

How to check used bicycle before buying it

Check the brakes, they must effectively work, and start to break before the handle touches the handlebars. Is there any play in the system / carriage / connecting rods - you can just grab the connecting rod and try to loosen it. Does the bicycle have all the spools. Is the cassette aligned with the system. When pedaling (you can do this aweigh) the cassette should not be shaking from side to side, it is necessary that it just spun around its axis. Backlash of a steering column, as at turns from the left to the right, and in a vertical direction. The steering wheel should be turned on the move and press / tug for him in a static position. Appearance of parts, their wear and tear, condition of cables, brake pads, grips, etc. Sounds issued by a bicycle: no squeaks and knocking should not be. Ratchet can crack, that's ok. Pull the bicycle «in reverse», the pedals should not spin. There should be no rust, for the sake of interest, try to inspect the steering or seat post, i.e. ask to get out saddle (the stearing wheels of modern MTB and hybrids are usually not removable). To check if the chain is shortened, put it on the biggest gears in front and behind, if the chain is significantly shortened, its length will not be enough. (never use this gear combination in cycling - the friction is enourmously stronger in this setup).

How to figure out if price is ok for used bicycle

Check what is the price of new bicycle of the same model and try to estimate how much it was used.

If it is impossible to find out how much a new analogue costs, for example, because the bike is too old, remember that you can estimate cost of individual parts уровень обвеса, модель тормозов. If this is unreal, then remember that usually the V-brake is cheaper than the disc brakes. Mechanical Disk breaks are cheaper than hydraulic ones. Weight is less, the better. Double rims are more expensive than single rims. Metal pedals are usually more expensive than plastic ones. The quality of the wings can also be to appreciate by eye. Thin cylindrical flu (ergonomic tubular nozzles on the ends of the rudder in the grip zone) is cheaper than the flu with variable thick. A fork with shock absorption is more expensive than a hard one.

How to avoid creaking when v-braking

Get some sandpaper and rub the rims.